Perseid Meteor Shower 2018: Where & When to View Them & How to Photograph the Show

The 2018 Perseid meteor shower is currently underway and will peak on the nights of August 11-12 and 12-13. During the peak of the meteor shower up to 60 to 70 meteors per hour are possible. The moon this year will not be an issue as it will be in the new moon phase on the night of the 11th. After the 11th the crescent moon will set before the show starts to pick up. Usually after 11PM. With limited or no moon light the skies will be dark which will make viewing the Perseids easier. 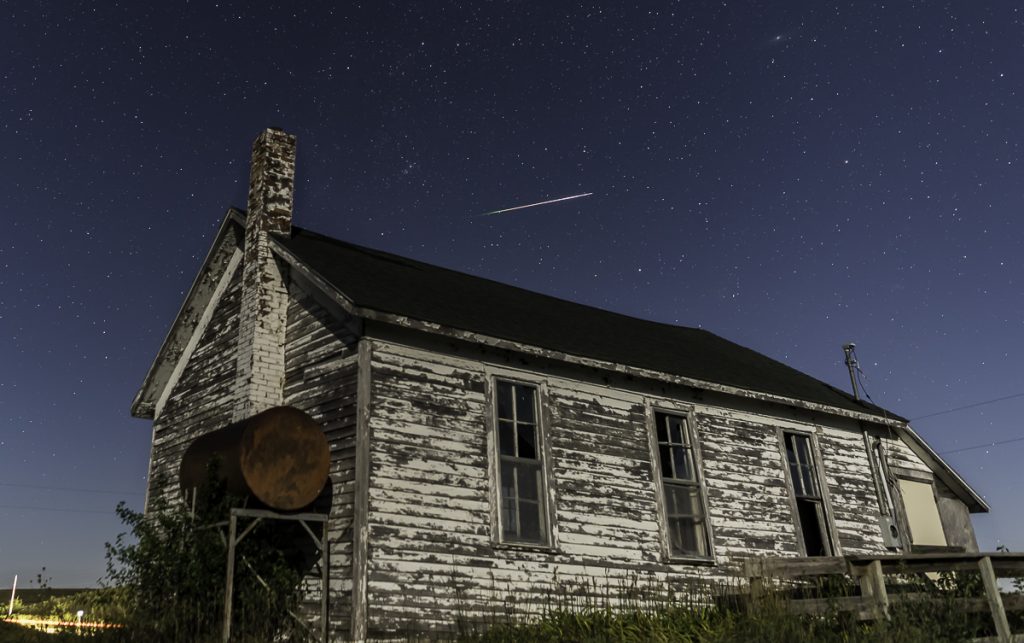 During the nights leading up to the peak display as well as nights following the peak will produce quite a few meteors, so if you miss out on the peak you still have opportunities to catch the show. By August 24 the Perseid meteor shower will be over.

The Perseid’s meteor shower is caused by the Earth moving through the debris field of the comet Swift-Tuttle. Each year the Earth passes through the dust and debris the comet leaves, creating the annual Perseid meteor shower. When you sit back to watch a meteor shower, you’re actually seeing the pieces of comet debris heat up as they enter the atmosphere and burn up in a bright burst of light, streaking a vivid path across the sky as they travel at 37 miles (59 km) per second. When they’re in space, the pieces of debris are called “meteoroids,” but when they reach Earth’s atmosphere, they’re designated as “meteors.” If a piece makes it all the way down to Earth without burning up, it graduates to “meteorite.” Most of the meteors in the Perseids are much too small for that; they’re about the size of a grain of sand. 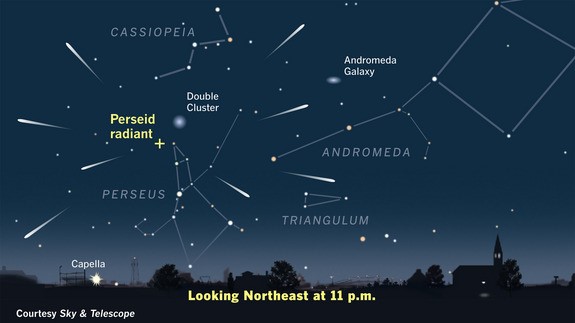 The Perseids originate from the constellation Perseus which is located in the northeastern sky. The origin of the meteor shower is called the radiant. Typically meteors from the radiant are quick and sometimes dim so what I usually do is look 30 to 45 degrees on either side of the radiant and 30 to 50 degrees above the horizon to catch those meteors that last longer in the sky.  It is important to note, however, that meteors from this shower can be seen in ANY part of the sky between midnight and dawn. I’ve personally seen some bright meteors in the south and southwest sky well away from the radiant. So my best advice to you is to find a nice dark location far away from city lights, pull up a chair or blanket, and enjoy the show.

You’ll improve your odds of seeing the meteor shower greatly by moving as far away from light pollution as possible. To help find those dark skies I visit the web site lightpollutionmap.info. It’s an awesome site that shows light pollution levels all around the world and it will help guide you towards the dark sky’s needed for optimal viewing.

The orange and red colors on the map show where light pollution is highest. You won’t see much in the way of meteors in these areas. The green to blue to grey areas will yield darker skies most optimal for viewing the meteor shower. You’ll want to head to these areas for best viewing as the skies will be nice and dark. A grey area on the map will be best as that will lead you to the darkest skies.

Check the Weather Forecast Before Heading Out

Be sure to check the weather forecast before heading out to view or photograph the meteors. Clouds will restrict viewing and if you have a completely cloudy sky or rain then you’re out of luck until the skies clear up. If the skies are clear to partly cloudy but you have haze or fog you can still see meteors but you may miss some of the dimmer ones. If you’re planning on photographing the show you’ll need clear to partly cloudy skies. Less than 50% cloud cover is best. Lower humidity will result in crisper photos as you’ll have less haze in the sky. But if it’s humid and hazy don’t give up. You can still capture some interesting photos of the show. Check your local National Weather Service forecast for the expected weather in your area.

What you Need to Photograph the Perseid Meteor Shower

If you plan on photographing the Perseids you’ll need the following equipment.

How to Capture a Perseid

The camera settings for capturing a meteor shower are very similar to what I use for Milky Way photography.  If I’m in a dark area I’ll use the following settings:

If you have light pollution issues use the following settings on the camera:

Focus is key when taking good crisp shots of the night sky. You’ll want to set your focus to infinity but remember that what is marked as infinity on your lens may not be infinity! To ensure proper focus use your LCD screen and live view to focus on a star or distant light on the horizon. Turn your focus dial until you have a sharp image on the star or light you’re using. If you move your camera or change the focal length then you’ll need to refocus again. For cameras that where you can’t see stars in live view focus on a distant object while its still daylight out. Once your happy with the focus switch the focus to manual on the camera and place a piece of gaffers tape on the focus ring to prevent it from moving.

Since the Earth rotates, objects in the night sky will move. You need to be aware of this because if you shoot with a shutter speed that is too long then your stars will start to trail. The amount of trailing depends on the amount of time the shutter is open and the focal length of your lens. Many photographers who shot the night sky now use the 300 rule to calculate the amount of time the shutter should be open to avoid star trailing. To calculate the exposure time value use this formula.

Full frame sensors have a crop factor of 1. DX and other crop sensor cameras have a crop factor of 1.5 or 1.6. Please refer to information from your camera manufacture to determine this number.  Many times I use a 24mm f/1.4 full frame lens on my Nikon D750 camera when shooting the night sky. Using the 300 rule my exposure time calculates to this value for this lens. 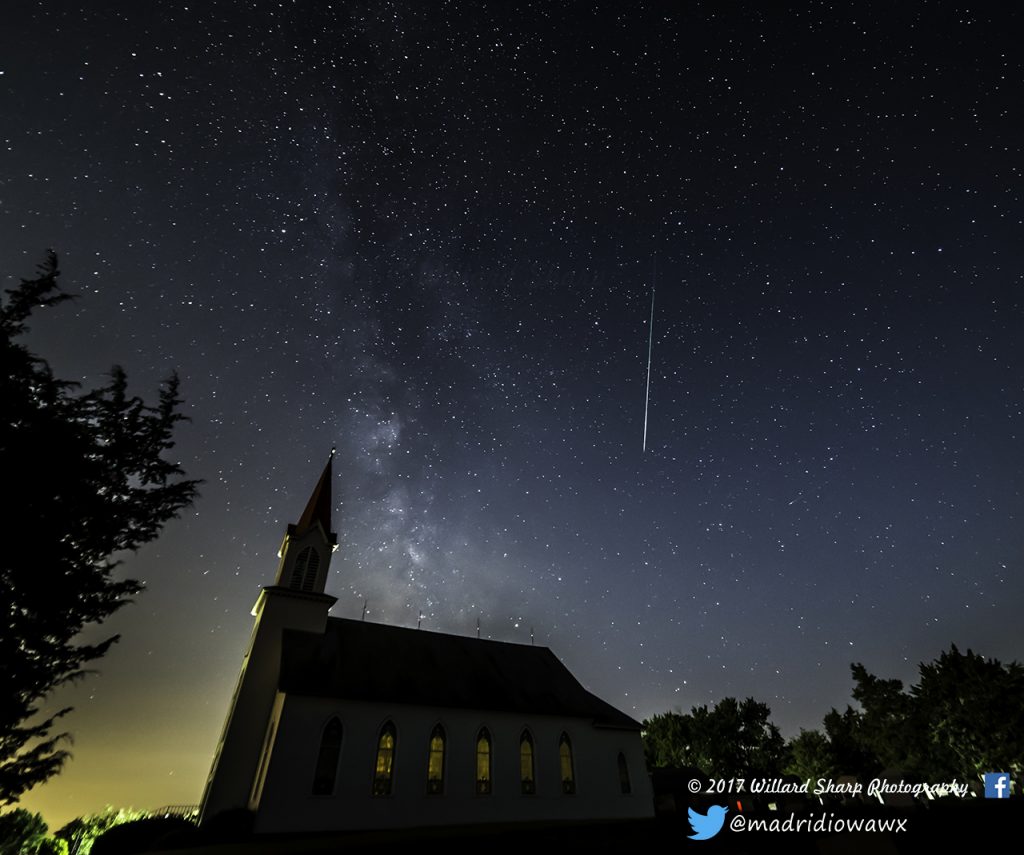 Perseid meteor over a country church.

When looking for a spot to shoot the meteor shower from look for something interesting to have in the foreground. This will make your project look more interesting. Have something in the foreground, middle ground, and the sky will be the background.  Be sure to keep the horizon last least 1/3 of the way up in your photo. Maybe even a little less. Plan on spending at least a couple of hours outside shooting as you will not get a meteor in each photo more than likely.

Once your all setup sit back and enjoy the show!