Its been a few days since the Great American Eclipse of 2017 moved across the United States and I for one will never forget my first total eclipse experience as a photographer and as a person. I’m still processing in my mind all the images and sensations I felt as darkness overspread my location near Geneva, Nebraska. The location where my family and I experienced totality was not our original target but it worked out great nevertheless. More on how we arrived at this target later on in the blog.

I’d been planning on getting into the path of totality for this eclipse for many months if not over a year. My general target during all of this time was to find a nice quiet gravel road in SE Nebraska in the path of totality. Also knowing that I need to keep my options and mobility open in case the weather did not cooperate.

This past summer I decided to book a room in Tecumseh, NE. Tecumseh is in the path of totality and I found a decent hotel at a good rate I could stay at the night before the eclipse. It also had the option of cancelling the hotel up to 12 hours before check in. That was a nice option to have. I figured that if weather became an issue on eclipse day I would cancel the hotel reservation and head to a new cloud free target area.

As the weather forecast models got closer and closer to eclipse day one thing became apparent. A disturbance in the SW United States had the possibility of providing cloud cover across much of SE Nebraska into NW Missouri on the day of the eclipse. High clouds, if thin enough, would still make viewing of the total eclipse possible. Photographing it would also still be possible. The key would be the thickness of the clouds. I considered cancelling my stay in SE Nebraska and head further west but that would be tough with various other commitments the day after the eclipse. That required me to be back Monday night. So on Sunday afternoon my family and I packed up the car for a one night stay in Tecumseh, NE. The cloud forecast weighed heavily on my mind on the drive over. 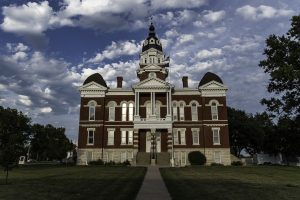 We arrived in Tecumseh in the late afternoon. After some pizza for dinner my wife and I decided to dive around Tecumseh and the neighboring countryside looking for a spot to view the eclipse. We found several good looking spots including right in front of the court house in town. It would have made for an interesting view. If the clouds cooperated the next day of course.

That evening I looked at several weather forecast models. All of them called for high to mid level clouds to be streaming over SE Nebraska during the eclipse on Monday. So I began looking at alternate sites to view the eclipse. According to the model data two possible target areas would be NW Missouri which was a little less than a two hour drive from our location. Or trek west about 2 hours to get into clearer skies. I decided to wake up at 4AM to look at the new models and the satellite data and make a final determination then.

So 4am arrives and I get up to check out the satellite and model data. Sure enough high clouds are moving in, but they are thin. I’m encouraged by this, initially. But as I dug through the data something concerned me. A large thunderstorm complex in Iowa produced an outflow boundary that was moving into NW Missouri and SE Nebraska. High resolution weather forecast models were calling for this outflow boundary to start firing up with showers and thunderstorms around noon in my area. I decided at that point the chances of us moving west were high. So I went back to sleep for a couple of hours and would look at things one last time at 7AM.

At 7am I looked at the new data and came to the conclusion that we would need to move west. Staying or moving to the east were not good options with a good chance for showers and thunderstorms. After breakfast we checked out and started making our way to the west with a target of Geneva, NE in mind.

We started out of town a little before 9AM. As we left Tecumseh we met a steady stream of cars heading into town. Undoubtedly to see the eclipse. I felt for these people as they were likely to get rained or clouded out. As we headed west the clouds got thicker and showers started to develop. The forecast was coming true but a couple of hours early. I felt really good about leaving our initial target location now. I was disappointed we would not be shooting the eclipse from the court house, but I was not going to miss the eclipse.

Geneva, NE is around 90 minutes to the west of Tecumseh. As we drove along traffic was really not all that bad. The clouds thinned as we continued west and we got out of the showers and thunderstorms. High clouds were still around but I concluded we could deal with those. Outside of Geneva on highway 41 we discovered the remains of an old farmstead with a couple of old buildings and a windmill. We decided to pull off at that location as there were no cars parked in the driveway. 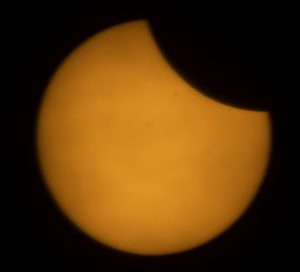 15 minutes into the eclipse.

When we arrived at the old farmstead it was about 30 minutes before the start of the eclipse. That gave me plenty of time to setup the camera with the telephoto lens and get the sun in focus. My plan with the telephoto lens was to take pictures every 5 minutes so I could create a sequence image of the eclipse once it was all over. For the most part this worked out with the exception of a 20 minute time period before totality where clouds thickened up and I could not capture any photos of the sun. In fact most of my photos for the sequence have some clouds over the sun. I still feel however that I can make a successful image.

As totality neared clouds where once again beginning to get thicker. I could see clear skies very close to the position of the sun a few minutes before totality and I was cheering the clouds on to move out of the way quickly. But unfortunately the clouds did impact the beginning of totality.

Even though the clouds were causing issues seeing the sun darkness was creeping in as totality approached. Birds returned to the trees and the old farm buildings thinking it was evening and time to roost. Crickets chirped all around us. The edges of the cumulus clouds in the sky looked very sharp and crisp. Sunset colors appeared on the NW horizon as the shadow of the moon approached. The temperature started to drop off and that felt very nice as it was a warm and humid day outside. Off in the distance you could hear thunder from a passing thunderstorm to our south. It was a unique and surreal experience. 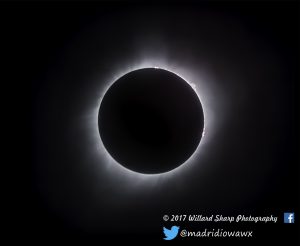 A successful bracketed sequence of totality.

The total eclipse began at 1:01pm in our location. We were immersed into darkness with sunset colors in all directions on the horizon. It was very amazing to see. As the total eclipse began mid level clouds were still thick and you could not see the sun. This brought me a great deal of distress as I was looking forward and had practiced many times with the camera capturing a bracketed sequence of the eclipse during totality. As I began cursing at the clouds I could see the thinner clouds moving ever closer to the sun. Then the sun reappeared and I could see the corona and I was very happy with that. I started my bracketed sequence using the wireless remote for the camera. This allowed me to continue soaking in all the sights and sounds going on around me as the shadow of the moon passed overhead. I continued hitting the shutter button on the remote while enjoying the show at the same time. As the end of totality approached I kept hitting the shutter in hopes of capturing the diamond ring effect as the sun reemerged from behind the moon. At this point thin clouds were present so I knew my photo may not turn out the best but I kept shooting as the sun reappeared. Darkness was quickly replaced by light and with that totality was over. You could see the shadow of the moon quickly moving off in the distance to the southeast. The crickets stopped and the birds came out of the trees. I began to warm up and things began to return to normal. From this point on I continued shooting every 5 minutes with the solar filter back on to create my solar eclipse sequence later on. 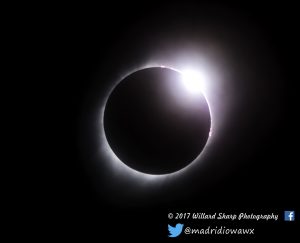 The diamond ring effect as the sun emerges from behind the moon.

I continued shooting every 5 minutes for the eclipse sequence up until the end at 2:29pm. My last shot was actually at 2:20. We then packed up the car and started the long drive back to Iowa and home. Normally the drive home from this location would take about 4 hours. However, traffic was rather heavy on the interstates and highways so it took us 6.5 hours to get back home. During the drive all of us in the car shared our thoughts and experiences during the eclipse. It was a wonderful experience for my family and we’re all grateful to have been able to participate in this rare event. We’re looking forward to the next eclipse in 2024 and will be making plans for that event as it draws closer. Hopefully next time we’ll be able to stay in crystal clear skies.

As for my composite shot of totality the last couple of sequences worked out great as the clouds thinned so you can see the details of the corona. I was also pleasantly surprised to find that I captured 3 prominences on the surface of the sun. As a photographer of weather and night skies capturing this total eclipse is one of the highlights of my photography career so far.